Transformers: Dark of the Moon

That’s the easiest part of the plot to grasp, but technicalities aside, in a nutshell; the Decepticons come back with a bang.

Indeed there are disguises galore in this film; new faces, old faces, good, evil, the past and the future, all are key factors playing a valuable part.

The latest film in the intergalactic metal man franchise creates a trilogy and the story continues with the ensuing battle between the Autobots led by Optimus Prime and the Decepticons led by the disgraced Megatron who was severely battered by Prime in their last rendezvous.

The Decepticons have gone ghost so in the interim the Autobots are working together with the military, aiding with Earths own wars, which creates a seamless link to present times. 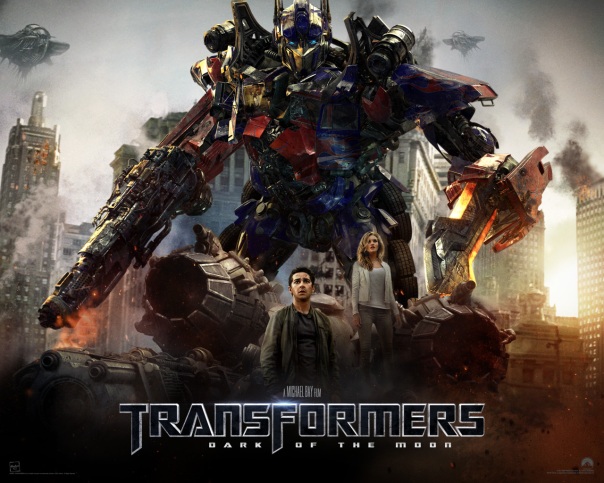 The absence of villainy is short lived and it’s not long until the bad guys start clawing their way back to power and the original hostilities that begun on Cybertron spills on to the third rock from the sun in a huge way, which is something that’s never happened in the previous films causing a somewhat apocalyptic experience.

There’s the odd robot war occurring but after a while you soon realize not much has happened on the action side of things for quite some time.

Bearing in mind the film is a sci-fi, action number; the action itself is really very delayed initially and it’s only in the last hour that things really slam in to fifth gear for the intense bot battles to get going.

One of the key focal points is around Sam (LaBeouf), frustrated with his life and the lack of contact with the Autobots, he feels as though he’s stuck in a rut (I can relate, I miss my transforming car too.) despite having won the affections of the lovely Carly (Huntington-Whiteley).

LaBeouf slips back into the role of the exuberant, fast-talking Sam with ease, the unlikely teenage hero, dying to get embroiled in the conflict he’s been frozen out of.

Newcomer and model Huntington-Whitely fills the shoes of her predecessor Megan Fox as the love interest of Sam this time, the current occupier of his heart, she plays a British bombshell. Must have been quite a challenge.

Watching the film itself is not easy though, there are so many twists and turns, lies and deceit it’s hard to know who’s who, what’s what, and which direction you’re heading for next and I feel like some of it was entirely unnecessary.

From a visual standpoint though, the Cybertronians never looked better and with some beautiful special effects and camera work, particularly in Chicago it’s certainly something to behold.

Optimus and Bumblebee are still winning in the stone cold badarse stakes for me but which side will you choose?